What You Can See, Where To Start, When To Go, and How To Stay Safe and Respectful.

One of Colorado’s most magnificent mountain mammals, the north-western moose is an integral part of any wildlife tour. One look, and it’s easy to see why:

Resident moose of the Rocky Mountains have been reported to stand over seven feet tall at the shoulder, with their head and antlers adding up to another two feet (which makes one wonder how on earth this happened). Their gorgeous chestnut brown coats are prized for their iconic fluffy locks. Both lady and gentleman moose have small skin sacks known as bells hanging from their necks.

A Moose by Any Other Name:

In fact, all moose on the planet belong to the same species. However what separates the north-western moose from its Alaskan and Russian cousins are the behavioral adaptations they have evolved to survive their mountainous habitat. Lucky for moose seekers, the Rocky Mountains’ unique habitat allows for a comparatively dense population.

Making the Moose out of Life:

Contrary to the herd habits of most other species of deer, a moose’s life tends to be one of solitary wandering. This applies to both males and females, with one important exception. Moose-mamas are some of the best around. They are fiercely protective of their calves , and look after them until the babies are over a year old.

These animals are big eaters, up to 60 pounds a day! Thankfully for us weak humans, moose are exclusively herbivores. They’re favorite foods include willow, aspen and aquatic plants; unsurprisingly, moose are great swimmers.

Where’s The Wildlife User Tip!: Moose have been known to revisit their favorite grazing grounds. Check your Where’s the Wildlife app to find these areas near you, or to add your own! 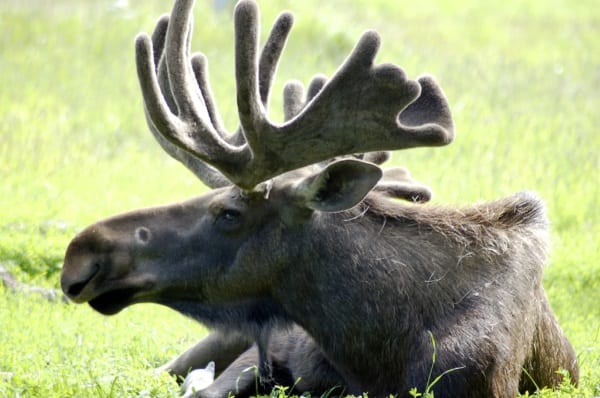 Oh Where Oh Where Could They Be?

To help start your search, the National Park Service has a few tips to help find moose hangouts. Users of Where’s the Wildlife have exclusive access to recent sightings and directions to get to them!

• Riparian Areas: Due to their taste for aquatic vegetation, moose can often be found near rivers, lakes and streams, especially with stands of willow or aspen!
• Highway 34 in the Kawuneeche Valley
• The east side of the Rocky Mountain National Forest

Moose live in self-established “home ranges,” usually staying close to their place of birth. Thanks to Colorado’s natural abundance, resident moose of the Rocky Mountains hold territories ranging between five and forty square kilometers. A moose will stay in its ancestral home its entire life so long as there is enough food to eat and mates to find (and not too many human dangers).

When Should I go?

Moose can be found at all times of year in Colorado. But there a few times of year that deserve special mention: The mating and calving seasons.

PLEASE NOTE:
These incredible events for moose viewing are also some of the most DANGEROUS. Bull moose can act unpredictably around females during mating season. Mother moose are also extremely protective of their calves. Where is the Wildlife aims to create a safe environment for humans and wildlife alike. Please read our Code of Conduct to ensure an enriching experience for all species involved.

The Mating Season:
The mating season begins around late September and runs through the end of October. During these months, bull moose call to their lady friends with distinct low grunting sounds. But when rival males show up instead, bull moose “spar” with one another, using their antlers to butt heads and prove their “mooslieness” to the females.

The Calving Season:
Calves are born about eight months after the mating season (May – July). These little guys are an absolute treat to find. Usually a moose mother gives birth to only one small charge, but in particularly abundant areas, twins and even triplets have been reported!

Tips to Stay Safe Around Moose

If You Give a Moose a Muffin…

Moose are incredible residents of the ecological landscape. Anyone able to catch a glimpse of one can see a bit of the raw magnificence our earth is blessed with. However, in order to protect both the wildlife and their human admirers, please respect the following rules:

• Moose-vehicle collisions are particularly dangerous to both moose and drivers. Remember to keep an eye out for wildlife crossing signs, reduce your speed and watch for these unpredictable mammals.
• Do NOT approach Mama Moose and her babies! Though usually non-aggressive, they will react much more dangerously if concerned about their calves. This is a great chance to test out your camera zoom!
• If a moose has its head down with ears back, or shows other signs of stress, it’s time to back up.
• Moose WILL charge if they feel themselves or young threatened. Luckily, they don’t really want to fight you either, and will often pull back in a bluff. DON’T wait to find out. Move back and try to get behind something solid, like your vehicle or a tree.

Have any amazing/inspiring/funny moose stories? Please leave a comment below, we’d love to hear them!